Our Tappan Pest Control Exterminator will identify the source of the pest infestation & create a customized treatment plan to eliminate the pests. We offer Rodent Control, Cockroach Control, Bed Bug Control, Termite Control and much more. Let us be your Tappan Exterminator, give us a call today 1-844-305-8999.

Carpet beetles are a fairly common pest. We continue to receive many calls us about this insect and we see an upward trend in their appearance in homes and businesses. Though these insects will do damage to fabric, they known to be a pest in food products as well. Carpet beetles occur naturally outdoors and then make their way into buildings. They may enter through improperly sealed or improperly screened doors and windows or through other cracks or crevices, but due to their small size, sealing them out is completely is difficult. Our Tappan Pest Control Technicians will create a custom Extermination Plan to fully eliminate these pests from your home or business. Give Our Tappan Exterminator a call today. 1-844-305-8999.

There is a superstition that earwigs burrow into the ears of people while they sleep. This is a myth and without any scientific basis. Earwigs frighten many people because of the pincers on the back of their abdomens. Earwigs use these pincers for defense and for sparing with rival earwigs. Earwigs do not spread diseases, but their menacing appearance can be alarming to a homeowner. Earwigs hide during the day and feeds on leaves, flowers, fruits, mold and insects at night. If you have an Earwig Infestation call our Tappan Exterminator at Dependable Exterminating. Our Tappan Pest Control Exterminator will identify the source of the pest infestation & create a customized treatment plan to eliminate the pests.

Moths And Webbing Clothes Moths
The most common, the Indian meal moth was given its name after an insect scientist found it feeding on corn meal, also known as Indian meal. From wing tip to wing tip, adult moths measure from five-eighths of an inch to three-fourths of an inch long.

The webbing clothes moth tend to hide when disturbed, so you might not notice you have an infestation until after the moths have already damaged your fabric, fur, or feathered items. Close examination of the objects will reveal silken webs the larvae have spun.

The webbing clothes moth is the most common fabric moth. The adult is gold with reddish-golden hairs on the top of its head. A row of golden hairs fringes its wings, which have a span of about 1/2 inch. Because these moths are weak flyers that aren't attracted to lights, you'll usually find them close to the infested items, such as in a dark area of the closet.

At rest, clothes moths are only about 1/4 inch long, while most food-infesting moths are about double that length. Clothes moths usually fly around only the immediate area of the house where the infestation has occurred, and their flight pattern is distinctive—they tend to flutter about rather than fly in a direct, steady manner as do food-infesting moths. Food-infesting moths also don't have the little tufts of hair on their head. If you see you have Clothing Damage call our Tappan Pest Control experts. Our Tappan Exterminator is trained to combat these damaging pests. 1-844-305-8999. 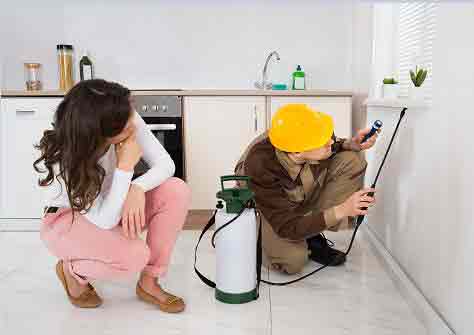